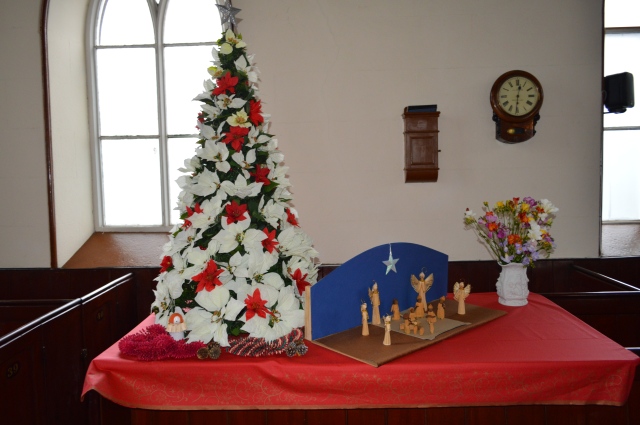 “Though lovers be lost love shall not,

And death shall have no dominion.”~Dylan Thomas.

Death is a funny thing.  It sharpens the senses like a shower of rain clears the air.  Memories once distant come close.  As a drop of dew on a leaf brings the colors and veins into acute focus, it can bring clarity to confusion.  But with death comes grief, which can confound and obfuscate; a tangle of emotions may well up, causing inconsistency and doubt.  Grief peels away protective layers to expose raw edges of pain, which bleed at the slightest provocation.

The day of my mother’s service of thanksgiving (By the way, I think that is the most beautiful way to think about a funeral.  Homegoing is another positive way to look at it, but thanksgiving allows us to reflect on all of the blessings we have received as a result of the life of another) was, as is common in Wales, rainy.  It was a gentle though persistent rain, one which meant that those gathered at the graveside needed umbrellas and waterproofs.  But it is the miserable rain which provides the wide palette of greens that Wales is famous for.  Although the trees were bare, the hillsides around the cemetery were lush; the stream across the one lane road was rushing merrily on its way, unaware of grief or life or death.  The simple and brief ceremony allowed my mother’s final resting place to be next to her beloved husband’s, uniting them in death as they had been in life: one unit.  The red carnations that signified the simple love they had celebrated from the early days of their marriage were a bright spot of color beneath the grey skies.

And then the service.  In the tiny chapel in the small village where they spent the last 24 years of their life together, the nativity scene she had brought from Jamaica was on display.  A Christmas tree was decorated in white and red poinsettias, the warmth of the tropics in the cold church.  Family and friends filled the pews, and participated in the service.  My sister Miriam read a poem written by a friend upon the death of her own mother.  My brother Andrew reviewed 92 years of a well-lived life, recalling moments of struggle and moments of joy; wearing his Jamaica tie proudly (yellow diagonals perfectly lined up on the knot), making a joke of the fact that he forgot to pack his dress shoes, work shoes contrasting with sharp suit.  My son Jabari brought memories from the grandkids across the pond.  I read the tribute to my mother as teacher, penned by Hyacinth, one of my mother’s best (and most appreciative) students.

Her early life, her life in England before Jamaica, her life in Jamaica, her life in Wales were all honored, and each of those who spoke captured her spark, her essence.  She was not remembered in some falsely glorified way, but in a way which allowed for her special personality along with her generosity, her loyalty, her love of remaining connected to others through letters and cards.

Death is a funny thing.  This past week has taken us on a long and dusty path through many years of memories.  We have been digging through stacks of papers saved for over 50 years.  My mother could not throw out anything, especially if it had been touched or written on by my father.  But she saved so much more.  She saved cards and orders of service for funerals and weddings.  She saved childhood drawings we had given her.  She saved (and recycled) birthday cards.  Her (and my father’s) commitment to ‘living simply, so others may simply live’ meant that a birthday card from her beloved husband could be given back to him years later (‘From’ scratched out, and ‘To’ written over it in a special pen).  Theirs was a love affair that has never ended.  Two people who still held hands at every opportunity.  That still saw in each other the brightest and the best.

This week has been a switchback of emotions, rolling from joy to pain, laughter to tears.  My father’s loss was as close as my mother’s, with the stacks of his papers to sort through.  But my mother’s hand guided us, she had done a lot of sorting herself.  Messages on envelopes would state their content, ending in “I’m sorry” as she knew we would still need to decide what to do with them.

Last night I attended a Christmas concert, the traditional hymns and readings for this time of year.  Schoolchildren performed, but the star entertainment was a Welsh Male Voice Choir (Maelgwn, for those interested).  If you have never heard a Welsh male voice choir, I suggest you do.  But I was almost undone when their first offering was the song chosen to be played as we walked into the chapel for my mother’s service: Nkosi Sikelel i’Afrika, the National Anthem of South Africa.  This was a song that I associate with my childhood.  My parents (activists in the struggle against apartheid) had an LP containing this and other South African liberation songs.  What brings it full circle is that the lyrics were written by a Xhosa teacher, with the tune derived from Aberystwyth, which was written by a Welshman. Jesu, lover of my soul is one hymn sung to the original tune.

In my head this morning I have a hundred thoughts, a hundred themes to be expounded upon, a hundred ideas upon which to base future messages.  If not a hundred, then certainly plenty.  Forgive the self-indulgence of reflecting on my own (and my family’s) personal rite of passage, this final broken tie.  Since death is a part of life, since none of us can escape its touch, we have to accept it.  Without death there can be no life, no appreciation of all that we have been given.

This Friday morning, may your memories of your own loved ones be alive in you today.  May they bring a smile (along with a tear) to remind you that love cannot be lost, and Death shall have no dominion!