Good Friday Morning Family! This morning I am blessed to be writing this message from the beautiful island of Jamaica, listening to the early morning calls of the birds up in the mountains. It seems only fitting that I borrow some of my father’s words (the Rev. Pearce Jones, for any readers who may not know) for the message, borrowed from notes written for his message delivered at Clarendon College on March 21st, 1980. These were transcribed for me by my sister Miriam, and if you remember what my father’s handwriting looked like, you will know it was a labour of love! 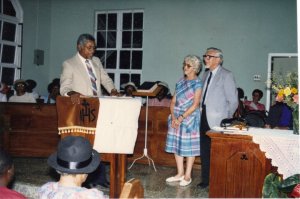 “A man lived about 300 years ago named John Bunyan.  He wrote a book that people still read today – Pilgrim’s Progress.  It tells the story – an allegory – about the journey of a man called Christian from the city of Destruction to the Celestial City.  He had many adventures.
On one occasion he was taken on a tour round a Great House.  He was shown a room.  It had a dirty floor with dried grass on it. There was a poor man working there with a muck-rake in his hand.  He was raking the floor.  His head was bent down – he was concentrating – hoping, I suppose, to find something of value – such as a coin.  Standing just above his head was an angel who was holding a beautiful priceless crown in his hand.  He was offering it to the man.  But the man couldn’t see him – he was too intent on looking down and scratching in the dirt.  If only he would look up!!!

A lot of our time in school is spent like the man in the room.  We concentrate on little things:  hope somehow to get a good mark in end of term test:   hurriedly doing our bit of homework:  working just enough to prevent us from getting into trouble.  And all the time, if only we would look up, what is being offered to us?  Knowledge – a crown – which is priceless:

The point of the story is as significant today as it was when John Bunyan first wrote it, and when my father told it. Many of us hold our heads down and concentrate on the smallest and pettiest aspects of life, missing out on the opportunities being offered to us. We get caught up in the little annoyances that can prevent us from seeing the big blessings that we should be celebrating. We find ourselves dragged into meaningless conflicts when we could be broadening our minds and exploring new vistas.

So on this Friday morning, I hope everyone is able to stop and look up, and grasp the priceless treasures that are being offered to you. I wonder what hymn was sung from Stuart Hall 22 years ago when that message was first delivered. I wonder if it was this one:

“I would be true, for there are those who trust me,

I would be pure, for there are those who care;

I would be strong, for there is much to suffer,

I would be brave, for there is much to dare.

I would be friend, of all, the foe the friendless,

I would be giving, and forget the gift;

I would be humble, for I know my weakness,

I would look up, and laugh and love and lift.

Have a great weekend Family!

← Friday Morning Message: “Rhetoric is not important. Actions are.” – Nelson Mandela
FMM: I will lift up mine eyes unto the hills →